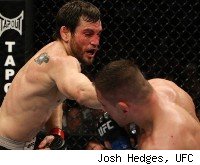 The UFC's star-studded return to the northeast got another boost on Friday when the expected rematch between welterweight stars Jon Fitch and Thiago Alves was officially added to the UFC 111 fight card.

The two first squared off back in June 2006, with Fitch winning in a second-round TKO.

At the time, both were relative newcomers to the UFC, as Fitch (23-1, 1 no contest) had just completed his second bout in the organization while Alves (16-6) was just 22 years old and in his fourth octagon battle.

Since then, the two have been among the most successful welterweights in the sport. Fitch rattled off a record-tying eight straight wins in the octagon en route to a UFC 87 title match against champion Georges St. Pierre, while Alves won seven straight before he got his chance at GSP.

Both fighters ultimately fell short in their quest for the championship the first time around, but a victory on March 27 will vault the winner back into immediate contention.

UFC 111 will be headlined by a welterweight title scrap between St. Pierre and No. 1 contender Dan Hardy, while Frank Mir and Shane Carwin will match up in an interim heavyweight title bout.

The event will emanate from the Prudential Center in Newark, N.J.