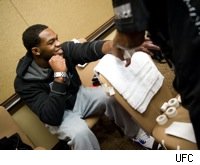 LAS VEGAS -- On our latest edition of FanHouse at the Ultimate Fighting Championship, we were joined by light heavyweight star Jon Jones just 24 hours before Saturday night's UFC 109 event.

Jones talked about the main event clash between Randy Couture and Mark Coleman and what Coleman needs to do to pull off the upset against "The Natural." Jones also discussed his upcoming fight against Brandon Vera next month and whether he is officially over his controversial loss to Matt Hamill in December. Enjoy the show below.

(Editor's Note: It's the second tab from the left.)