Dana White Not Pleased With Media Coverage of Herschel Walker 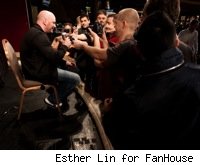 LAS VEGAS -- Dana White admits that he was impressed with Herschel Walker's ability to stay in shape at 47 year old, but the UFC president says he has no interest in seeing him compete in MMA anymore. He also doesn't understand why the media paid so much attention to Walker's debut last week.

Following Wednesday's UFC 109 press conference, White explained why he thinks Walker doesn't deserve more coverage than some of the top stars in MMA and why he will never be a force in the sport. Check out the video below.