Dana White: Nick Diaz Won't Return to UFC Until He Learns to Play the Game 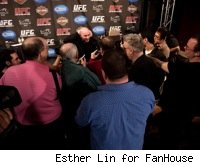 LAS VEGAS -- Since leaving the UFC in 2006, Nick Diaz is 7-1, with 1 no contest. The newly crowned Strikeforce 170-pound champion has finished his last six opponents in decisive fashion and continues to improve with every fight.

So does that mean Dana White would ever consider bringing him back to the UFC? White said at Wednesday's UFC 109 press conference that Diaz is talented enough to be in the UFC, he just doesn't know how to "play the game."

"The last time Nick Diaz was in the UFC, he got into a fist fight in the hospital -- you know what I mean? -- with the guy that he fought here," White said. "You can't do that kind of stuff. You know, the kid is very talented, and he probably should be in the UFC, but that kind of stuff has got to stop."

Watch White's thoughts on Diaz below.