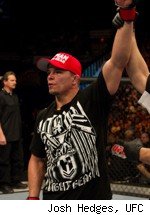 Rick Story and Nick Osipczak will look to make it three straight in the UFC at the expense of the other when the welterweights meet at UFC 112 on April 10 in Abu Dhabi.

MMAJunkie was first to report the matchup was "in the works," and MMA Fighting has since confirmed with sources close to the bout that the fight is expected to happen.

After losing his UFC debut to John Hathaway at UFC 99, Story (9-3) impressed in his next fight at UFC 103 with an arm-triangle choke submission over Brian Foster, taking home the Submission and Fight of the Night awards in the process. Story won again last month at UFC Fight Night 20 over Jesse Lennox and was rewarded with a new four-fight contract.

A cast member on The Ultimate Fighter 9, Osipczak (5-0) is one of the handfull from the US vs. UK season still with the UFC. Inside the Octagon, he holds wins over Frank Lester by rear naked choke and Matt Riddle by TKO.

UFC 112 features Vitor Belfort vs. Anderson Silva for the middleweight title, Frankie Edgar vs. BJ Penn for the lightweight title and Matt Hughes vs. Renzo Gracie in a welterweight bout.