Randy Couture Believes He Is Getting Better at 46 Years Old 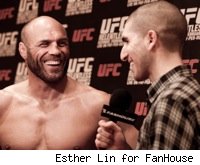 LAS VEGAS -- MMA Fighting spoke to Randy Couture at Wednesday's UFC 109 media day, and the 46-year-old former light heavyweight and heavyweight champion said that he feels he is competing at a higher level now than ever before. Of course, some have complained that there is no interest in seeing Couture and 45-year-old Mark Coleman square off in Saturday night's main event, but to that Couture simply replied that those people haven't been "paying too much attention."

Couture also talked about why he thinks he decisively defeated Brandon Vera at UFC 105 and whether a win over Coleman puts him next in line for a 205-pound title shot. Check out the video interview below.