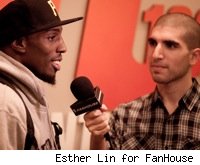 LAS VEGAS -- Phil Davis, a four-time All-American, two-time Big 10 champion and 2008 NCAA champion collegiate wrestler from Penn State, made his MMA debut 15 short months ago. Yet after winning his first four professional fights, Davis has already made it to the UFC, and will face veteran Brian Stann at UFC 109 on Saturday night.

MMA Fighting spoke to "Mr. Wonderful" on Wednesday about how he is feeling before his much-anticipated Octagon debut, his familiar nickname and whether he expected to make it to the UFC this early in his career. Davis also took the time to plug his popular Twitter page a few times. Check out the video interview below.