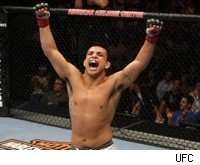 UFC lightweight prospect and season eight winner of The Ultimate Fighter Efrain Escudero received a positive prognosis from a recent MRI, and suffered no tearing in his right elbow as the result of an arm bar loss to Evan Dunham at UFC Fight Night 20 in January.

MMA Fighting was informed of the news by Escudero's manager, Jason Genet.

Escudero (13-1) suffered a sprained elbow and still has swelling from the injury, but Genet says he'll still be ready to fight if the UFC calls on him for a May 29 date. Recent rumors suggested he will be paired against Dan Lauzon at UFC 114.

Esudero and Dunham were locked in a close match during the third round of the event when Dunham scored a trip takedown, took Escudero's back and transitioned into an arm bar. Escudero tried to fight through the hold but after a few excruciating seconds was forced to tap after it appeared his elbow popped.

The Arizona-based fighter had begun his pro career with 13 straight wins and also captured season eight of TUF before dropping his first career bout to Dunham.