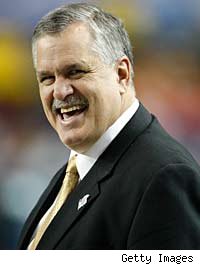 MIAMI BEACH, Fla. -- The 47-year-old former football star Herschel Walker has received a lot of attention since winning his mixed martial arts debut on Saturday night. One former player who was particularly interested in how Walker did was Matt Millen -- who's even older than Walker but says he'd love to try MMA himself.

Millen has no illusions that he'd actually be a competitive pro fighter at his age, but he says he has so much respect for the sport and its athletes that he'd love to train with them and learn from them.

"I know just how Herschel feels," Millen said. "Guys who played football, we loved the competition, the physical challenge of going up against another man and seeing who's stronger. There's no way to compete like that again."

Millen said he respects anyone who tests himself in a combat sport. He loves amateur wrestling, which both of his sons were involved in, and he tried boxing when he was a young man. And he said he doesn't have much patience for those who decry MMA as violent and barbaric.

"People who say that must not have competed in a physical way, or they just can't understand it," Millen said. "It's about competition. So you get hurt? You get up and get better. You continue to compete."

Millen said that whenever he's watched an MMA fight, he's come away impressed by the fighters' abilities, both physical and mental.

"The way they train amazes me," Millen said. "And they're tough mentally. You take a fist to the mouth, you overcome it."

Millen rolled his eyes when I brought up Johnnie Morton, who played for the Lions when Millen was their general manager, who had a run-in with Millen after leaving the Lions, and who got knocked out in 38 seconds (and failed a steroid test) when he tried MMA himself. But while Millen doesn't have much respect for Morton, he does have respect for professional MMA fighters. So much that, even into his 50s, there's a part of him that wishes he could give the sport a shot.