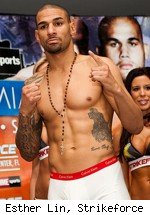 For the many that found it difficult, or outright couldn't, watch EASportsMMA.com's faulty live stream of the Jay Hieron vs. Joe Riggs fight at Saturday's Strikeforce: Miami, Strikeforce.com is now offering the fight for free until Feb. 6.

It's a nice gesture by Strikeforce for the free agent Hieron, whose fight was his third consecutive where he's been bumped or made unavailable in some capacity.

First at Affliction a year ago, his fight against Jason High took place after the Fedor Emelianenko vs. Andrei Arlovski main event due to time constraints. Then after signing with Strikeforce, he was supposed meet Diaz for the vacant Strikeforce welteweight title, but the fight is called off when Diaz skips his pre-fight drug test. Hieron fights Jesse Taylor instead on the card, but it's taken off the Showtime telecast to avoid running over the time slot.