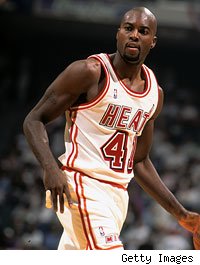 It hasn't exactly been groundbreaking nowadays to hear a retired pro athlete try mixed martial arts. But unlike Herschel Walker, Johnnie Morton, Marcus Jones and Jose Canseco, former NBA All-Star Glen Rice has found involvement in the growing sport without any inclination towards stepping inside a caged enclosure.

"No Herschel Walker for me," Rice told MMA Fighting recently with a hearty laugh. "Hey, I applaud what he's doing, but I'm going to stay in the position I'm in right now. I'm going to watch these guys enter the cage, and I'm going to stay on the outside of it."

The former NBA star's new role is the owner and head of G-Force Fights, a Miami-based MMA promotion that will run its third card on Thursday.

His company, along with Pro Team TKO, are presenting "Bad Blood 3" with local American Top Team talents Hector Lombard and Jorge Masvidal headlining the co-main events on the 13-fight card.

After 15 seasons in the NBA, three All-Star games and four years removed from his 2000 NBA championship, Rice retired from competition in 2004. Then Rice took, for the most part, the next two years off to reflect on his accomplishments and give his body a much-needed rest.

But by 2008, Rice, who says he became a big fan of MMA since the early UFC days of Royce Gracie and Ken Shamrock, was ready to turn the interest into opportunities, not just for himself in his post-NBA unemployment stage, but also for others in the area.

"I said, 'You know what?" Instead of being a big fan, I think I can do something to help these guys and being had I just retired from the NBA," he said. "It gave me an opportunity to do something as well. So I decided to start my own promotional company and form G-Force Promotions."

G-Force Fights ran its first show in November 2008, and leading up to the event, Rice found himself switching roles from being a fan looking in, to understanding the business from the inside. Rice conducted his research and assembled his team. And upon taking an up-close look at the sport, Rice saw the sport in a view much different from ones as a spectator on the couch or stands.

"I'll tell you," Rice said with a chuckle. "Being a basketball player, I thought we had dedication. These guys here? I got a brand new respect for what they go through and the discipline they have to keep doing what they're doing."

In preparation for an event, Rice steps into his office at the "first crack of daylight" and his daily responsibilities include checking on, scouting and bringing in up-and-coming fighters. His focus is on Floridians, but he'll also speak with outside fighters about flying in.

With his background in the high stakes world of professional ball-playing, Rice brought with him an insight on the process of negotiating.

"Being in a position handling your own company, you get a lot of contracts," Rice said. "You have to make sure the 'Ts' [are crossed] and 'Is' are dotted, and through my 15 years in the NBA, I've had numerous contracts slapped in front of me. That adjustment wasn't too hard.

"At the same time you're dealing with people. You have the opportunity to meet with different people, personalities. It's pretty much same in that aspect, but a different sport."

However, there are interpersonal downfalls that come with the job.

"You're in the position where you have a little more control," Rice said. "Sometimes you can be looked at as being the bad guy because negotiations do fail sometime when you're discussing a price on what you want to pay them. It's fun though, It's challenging cause everyday something different comes along and you got figure out, how do I handle this?"

While Rice said his long-term goal is to branch out and promote cards throughout the US, he understands there's no catching the UFC anytime soon.

"Everyone hopes to in that same level as Dana White," Rice said. "But we're going to take small steps. We realize that in order to get where he's at we got to pay our dues."

A busy work schedule makes it difficult for Rice to match White in another area. A writer (at least this one) probably wouldn't describe Rice as being "built like a fighter."

When asked what his workouts are in order to keep in shape as a 41-year-old retired athlete, Rice answered bluntly, "I don't."

"Ever since I started the company it's not easy getting back in the gym as much as I would like," Rice said. "One of the things I focus on is eating right. There are days when I do get a chance to go to the gym, it's not so often. It's little cardio, lifting weights every so often. After you retire, you tend to put on some pounds. The pounds I've put on, sometimes I'm satisfied with it, sometimes I'm not so [Laughs.] One of these days I'll get back to it, but it'll never be the same as when I was playing."

Surrounded by martial artists, Rice has been approached with incorporating MMA conditioning workouts to remedy the situation. However, it's an option that hasn't been exactly enticing.

"I have a lot of fighters that say, 'Hey why don't you come out and work out with us,'" he said.

"I'm like 'No, because I have seen how you guys work out.' And I know at this current condition I am not in the position to do the kind of work they do. Those guys, their disciple is unreal, man."

Rice jokes, if it ever comes to it, his self-defense will be in the form of his independent contractors.

"I would tell the fighters and partners, 'Look, I have enough protection around me. I got all these guys that want to fight for me, so they got to protect me in order for me to keep providing my services.'"