Chael Sonnen Finally Has Our Attention; Now Can He Beat Marquardt? 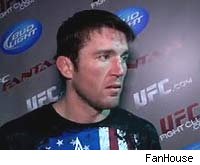 Chael Sonnen has spent the last few days making headlines with his mouth, but now that he's got our attention, he'll have the chance to impress us without saying another word. Sonnen gets that chance on Saturday, and it's the opportunity of a lifetime. In Thursday's UFC 109 press conference, UFC President Dana White said that the winner of the fight between Sonnen and opponent Nate Marquardt will get the next crack at the middleweight title.

Some would say that Sonnen (24-10) probably doesn't deserve to be in this position. Though he does have an excellent 9-2 record over his last 11 matches, he's 2-1 in the UFC and was tapped out by Demian Maia in less than three minutes. While his decision wins over Dan Miller and Yushin Okami were solid victories against seasoned veterans, they failed to rally the masses to his side. In fact, his last fight against Okami didn't even make the main card, relegated to undercard status. As he's learned, sometimes, you have to scream for attention.

Sonnen is one of the few top-level fighters who isn't afraid to speak his mind, say controversial things, or call out a prospective opponent.

A case in point is this fight; Sonnen wasn't even originally targeted for a matchup with Marquardt.

Originally, Marquardt was supposed to tangle in a No. 1 contenders matchup with Dan Henderson, but when Henderson's free agent negotiations with the UFC hit a standstill, the company chose to move in another direction.

Weeks before the fight broke down -- literally hours after Sonnen had beaten Okami at UFC 104 -- Sonnen had volunteered to step into his teammate Henderson's shoes should contract talks stall ("I keep hearing rumblings that he isn't going to keep that appointment. If he doesn't, I will," he told MMA Fighting then).

His offer came at an opportune time; the UFC's middleweight division is the thinnest of all its weight classes, and a look around the landscape left Sonnen as the logical pick. He'd already lobbied for the fight, was coming off an impressive win, and perhaps just as importantly, he wouldn't be afraid to hype up the bout.

An aspiring politician, Sonnen referred to himself as a top five middleweight so many times that many have come to believe it. Whether he is or isn't, of course, is a purely subjective matter, but a win over Marquardt would leave the verbose fighter with the last word against a lot of critics. A well-rounded fighter with knockout power and excellent submissions, Marquardt (29-8) is just the kind of test to prove whether Sonnen at 32 years old, is ready to break into the elite level.

Among the believers is his former Team Quest teammate and UFC 109 headliner Randy Couture. The two still occasionally train together, and Couture's watched most of Sonnen's development as a fighter from a very close range.

"I've been very, very impressed watching Chael," he said. "I've known him for a long, long time, and to see him finally come into his own and put together that eye of the tiger, I'm very happy for him."

Sonnen's had his eye on UFC gold for quite a while.

Back in 2008, right before Sonnen was supposed to fight then-WEC middleweight champion Paulo Filho for the title for the first time, he emailed UFC matchmaker Joe Silva, telling him he was thinking about calling out UFC champ Anderson Silva after he beat Filho for the title.

He didn't beat Filho in that match, tapping out to an arm bar, but he did get him the second time around, handing an uninspired Filho his first career loss in a unanimous decision.

Against Marquardt, Sonnen is considered a major underdog, as Marquardt is as high as a 5-to-1 favorite on some betting lines. Over and over though, we've seen fighters follow the same blueprint as Sonnen: legitimacy and a title shot through trash talk and beating a bigger name. It happened as recently as UFC 105 when an underdog Dan Hardy beat Mike Swick to win a welterweight title slot against Georges St. Pierre.

Surprisingly, while Sonnen has had plenty to say this week, he's had nothing negative to say about Marquardt, calling him a "gentleman." Perhaps he simply realizes that the time for talk is over; he's got his shot, and this time, he's got our attention, too.