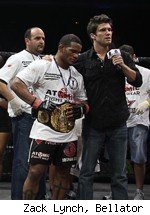 Below are the current dates for season two and three of Bellator. The Hollywood, Fla. dates are at the Seminole Hard Rock Hotel & Casino.