Jorge Santiago to Defend Title Against Mamed Khalidov at Sengoku 12 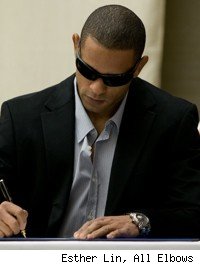 Sengoku middleweight champion Jorge Santiago will meet Mamed Khalidov in a rematch at Sengoku 12 -- this time with the belt on the line.

The title bout was one of three bouts announced Wednesday for Sengoku 12 happening March 7 in Tokyo. The other bouts made official are Shigeki Osawa vs. Kyung Ho Kang and Yuji Hoshino vs. Wilson Reis.

In his first fight since winning the Sengoku title, Santiago (21-8) lost by first-round TKO to Khalidov at Sengoku 11 in November. Santiago had won nine consecutive fights leading up to his Sengoku Grand Prix and title win.

Khalidov (20-3-1) had an impressive record entering his Sengoku debut, but as an unproven commodity, his first fight with Santiago was not for the title.

Another fight to keep an eye on is Yuji Hoshino taking on Wilson Reis. Hoshino was the 2008 Cage Force Featherweight Grand Prix champion and Reis is a BJJ world champion (when he was a brown belt) and former EliteXC bantamweight champion.

Maximo Blanco was previously announced as a participant, but an opponent remains unknown.