Hector Lombard Frustrated With Lack of Attention, Wants to Fight Best in 2010 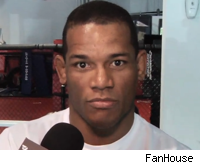 Hector Lombard isn't content being the Bellator middleweight champion. In fact, when MMA Fighting spoke to Lombard last week at American Top Team in Coconut Creek, Fla., he said that he was frustrated with the lack of respect and attention he receives from other fighters and promoters. So, Lombard has begun calling out some of the top fighters in the world, and he has made it clear that he wants Bellator to sign former WEC champion Paulo Filho. He has also let it be known that he would like a shot at Dan Henderson.

Lombard, who will compete on the G-Force Fights 3 card against Joey Gorczynski this weekend, also talked about being a leader at ATT and training with Kimbo Slice. Check out the video interview below.