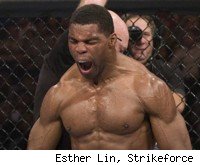 The Herschel Walker effect boosted Strikeforce: Miami's ratings, as the event drew 517,000 viewers, according to a news release.

That makes Strikeforce: Miami, the second-most watched mixed martial arts event that Showtime has ever aired, trailing only last August's Carano vs. Cyborg event, which drew 576,000.

While Walker was featured in most of the pre-show publicity, the true main event was a welterweight championship bout between Nick Diaz and Marius Zaromskis, which Diaz won via first-round TKO. Earlier in the evening, Walker won his MMA debut with a third-round TKO over Greg Nagy.

The event became only the third Showtime MMA event to have drawn over 400,000 viewers on its first airing.

Airing against it on Spike, a rebroadcast of December's UFC 107 drew 2.2 million viewers.

Spike is available in nearly 100 million homes while Showtime, a premium channel, has about 12 million subscribers.