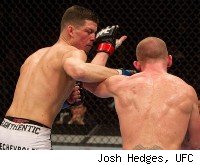 True to his word, Nate Diaz is moving up in weight.

The Stockton, Calif., fighter who has competed exclusively as a lightweight in the UFC said after losing a close split-decision to Gray Maynard on Jan. 11 that he planned to next compete as a welterweight. The UFC has accommodated his desires by matching him up with hard-hitting Rory Markham in a UFC 111 tilt.

The company confirmed the news on Tuesday.

Diaz (11-5) started his UFC career by winning season five of The Ultimate Fighter and then reeling off five straight victories, but since the last of those (a split-decision over Josh Neer), he's dropped three of his last four.

Citing a difficulty in making the 155-pound lightweight limit, Diaz voiced a desire to move upward, and gets a chance to do so against Markham, who's earned 11 of his 16 wins by KO or TKO.

Markham (16-5) will be coming off a long layoff, last appearing on a UFC card in Feb. 2009, when he was knocked out by Dan Hardy. He'd been expected to fight in January but couldn't due to a knee injury that is now apparently healed.

UFC 111 will emanate from the Prudential Center in Newark, N.J., and feature two title fights: a welterweight championship fight between Georges St. Pierre and Hardy, and an interim heavyweight tilt pitting Frank Mir against Shane Carwin.