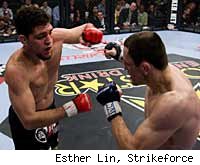 Nick Diaz finally returned to his natural weight class of 170 pounds on Saturday night at Strikeforce Miami, and he put on a show. Diaz easily dominated Dream welterweight champion Marius Zaromskis, winning the Strikeforce welterweight belt and showing that he's one of the best in the world at his weight class.

In fact, I think he's the one welterweight in all of MMA who would give Georges St. Pierre a real run for his money. Unfortunately, as long as Diaz is in Strikeforce and GSP is in the UFC, we won't get to see that match-up. But as you'll see in my rankings of the top 10 welterweights below, Diaz is in elite territory.

(Editor's note: The individual fighter's ranking the last time we did welterweights are in parentheses)

1. Georges St. Pierre (1): After he fights Dan Hardy in March, he'll have just about run out of challengers in the UFC.

2. Jon Fitch (2): He's won enough fights that he deserves to be considered the No. 2 welterweight in the world, but he got whipped when he got his chance against GSP.

4. Nick Diaz (9): Strikeforce will have an extremely tough time giving Diaz tough competition. A likely title defense against Hayoto Sakurai should be a cakewalk for Diaz.

5. Josh Koscheck (4): He's got a tough test against Paul Daley in May.

6. Dan Hardy (5): He can shock the world when he gets his chance against GSP in March, but it's hard to see any way he wins.

8. Mike Swick (7): Looking to bounce back from his loss to Hardy when he faces Paulo Thiago at UFC 109.

9. Paulo Thiago (8): Some MMA fans think Thiago got lucky when a referee handed him a TKO win against Koscheck, but if he can beat Swick, no one can dispute that he's an elite welterweight.

10. Jay Hieron (10): He ought to get the next shot at Diaz in Strikeforce, but he's now a free agent who could end up going elsewhere -- and making it that much tougher for Strikeforce to find good competition for Diaz.