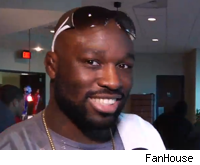 When MMA Fighting recently spoke to Gegard Mousasi about a potential matchup against Muhammed Lawal, the Strikeforce light heavyweight champion said that he hasn't been all that impressed with Lawal's skills. MMA Fighting later gave Lawal a chance to respond to Mousasi and his critics, who have said that he hasn't accomplished enough in his young career to deserve a shot at Mousasi.

Midway through the interview, Lawal's friend and future training partner, Paul Daley, also stopped by to offer his two cents on the fight and officially announce that he was one of the newest members of Team Get Dat Paper. Check out the video interview below.