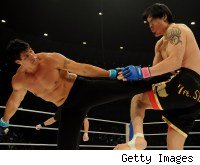 Jose Canseco has never been one to miss a chance to take a shortcut or get his name in the news, so it should come to little surprise to anyone when the self-admitted juicer seized upon someone else's success in an attempt to steal the spotlight for himself.

Writing on his Twitter account, which amazingly has over 320,000 followers, Canseco wrote, "I guess I may have to show Herschel Walker who the real bad Boy of the Sports industry is. If the powers that be are reading, I want in."

Even if the "powers that be" are reading his tweet, I doubt they are even remotely interested.

Canseco, you may remember, has already dabbled in MMA, losing to Hong Man Choi in just 77 seconds back during DREAM's Super-Hulk tournament in May of 2009. After turning and running from Choi several times during the bout, he collapsed after throwing a leg kick and submitted due to strikes. All in all, it wasn't a performance worthy of a sequel (or maybe even of the original airing, the video of which is below).

At 45, Canseco is actually two years younger than Walker, and outweighs him significantly. Canseco weighed in at 253.5 for his fight against Choi; Walker weighed 214.25 in defeating Greg Nagy at last weekend's Strikeforce: Miami event.

Canseco isn't worthy of sharing the same ring with Walker.

While Walker earned a series of athletics accolades (Heisman Trophy, USFL and NFL star, Olympic bobsledder) through a tireless work ethic, Canseco took shortcuts as an admitted cheater. After football, Walker became a successful businessman, heading a multi-million dollar food company; Canseco betrayed the trust of his friends and teammates to make money, and is still reportedly in financial trouble. Walker turned his MMA earnings over to charity; Canseco is simply after a payday.

Finally, Canseco showed little respect for the sport, not training at all prior to his one bout, while Walker moved to San Jose, Calif., for two months to train with the world-class fighters and trainers at American Kickboxing Academy.

A Walker-Canseco fight is about as likely to happen as the disgraced slugger returning to baseball.