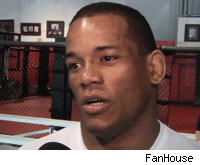 Bellator middleweight champion Hector Lombard and Bellator season one lightweight semifinalist Jorge Masvidal are set for action this Thursday as co-headliners for a G-Force Promotions "Bad Blood 3" card at the American Airlines Arena in Miami, Fla.

The two American Top Team members are expected to be back for season two of Bellator. Lombard will defend his belt against the No. 1 contender determined by the second 185-pound tournament and Masvidal is being planned to rematch Toby Imada.

But before they do, Lombard and Masvidal will face Bellator veterans in Joey Gorczynski in a light heavyweight bout and Luis Palomino in a lightweight bout, respectively.

Lombard (22-2-1) hasn't lost in over three years and his two career losses were against Gegard Mousasi and Akihiro Gono in PRIDE.

The official fight card is below.