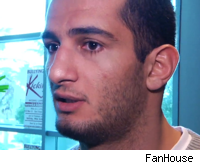 Strikeforce has yet to officially announce Gegard Mousasi vs. Muhammed Lawal for the light heavyweight title, but the 205-pound champion told MMA Fighting late last week that he expects the fight to happen this April on CBS.

Mousasi also talked about training with UFC welterweight champion Georges St-Pierre in Miami, how many times he would like to fight in 2010 and Dana White recently saying he would like to sign him to the UFC. Check out the video interview below.