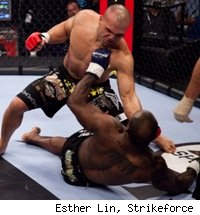 With another Strikeforce event in the books and some time to reflect on what we saw last Saturday night, it's time for some observations based on our perfect hindsight.

What, if anything, did Nick Diaz do wrong? Does Bobby Lashley's win have any long-term significance for his career? And what in the world is Strikeforce doing with Jay Hieron?

All this and more as we look back at Strikeforce's most recent offering.

1) Promotional opportunities were missed
Here's the situation: Nick Diaz won Saturday and looked outstanding doing so, completely shutting down Marius Zaromskis' standup attack. In doing so, he becomes the first-ever welterweight champion. So who does he say he wants to fight during post-fight interviews? Jay Hieron? No. Mach Sakurai? Nope. He calls out Georges St. Pierre.

There's only one problem, of course, and that's that GSP is in the UFC, and there's no way that fight is happening between the two organizations. By voicing a desire to fight GSP, Diaz is essentially telling fans that his most worthy weight-class adversary is in another company, which while true, is not exactly going to help hype up his next fight, a fight which will most decidedly not be against Georges St. Pierre.

Diaz can't be blamed for wanting to fight another great fighter, but Strikeforce has a limited amount of time in which the eyes of the MMA world are thrust upon them, so they shouldn't be wasted highlighting their rival organization at their own expense.

All of this leads me to my second point...

2) Challengers come out of the ether
After the event, Strikeforce CEO Scott Coker told reporters that he had some opponents in mind for his champions. He hopes to sign title fights between Shinya Aoki and Gilbert Melendez (lightweights), Hayato "Mach" Sakurai and Nick Diaz (welterweights), and Erin Toughill and Cris Cyborg (women's 145-pounders).

From a purist's perspective, those matchups are acceptable. But if Strikeforce is truly trying to engage the middle America sports fans who just tune in from time to time, Aoki, Sakurai and Toughill may not be the best choices. Why? Because none of them have ever competed on a Strikeforce show. Many fans have no clue who they are.

How, a fan might ask, is a first-time Strikeforce fighter already competing for a title? It's happened before, of course (Zaromskis was a first-time Strikeforce participant when he faced Diaz on Saturday), but it's hard for a casual fan to develop into a regular fan of a promotion when even the top-level fighters are constantly shuffled in and out.

3) Jay Hieron deserves better
He's been in contractual limbo, had fights canceled, been looked past and ignored, and things unfortunately don't seem to be picking up much for Hieron, who at least was victorious in a unanimous decision against Joe Riggs on the undercard.

Hieron, who is 19-4 and riding a seven-fight win streak, went from being the No. 1 welterweight contender in waiting to not even having his fight televised. The fight was then supposed to air online at EASportsMMA.com, but even that didn't happen due to what the company described as "servers overload." Then, Strikeforce spelled his name wrong in a post-fight news release.

To make matters worse, Hieron will probably be bypassed again for a shot at the 170-pound belt (see No. 2 above), and when reporters asked Diaz if Hieron should be next up for him, Diaz was not exactly complimentary.

"That fight wasn't even on the main card," he said. "Why am I going to fight him? Nobody saw him. Nobody even knows who he is? You keep bringing me these guys no one knows."

That could have been solved by putting Hieron on the main card, but two of those spots were given to guys (Bobby Lashley and Herschel Walker) who were there more for sizzle than steak.

3a) The balancing act is tricky
Strikeforce deserves serious credit for finding ways to get attention for the promotion. Even if you disagree with the organization putting Herschel Walker on a televised card at 47 years old, you have to admit it was a public relations home run for them.

The problem with that though, is it takes a TV slot away from someone more deserving. So here's an issue worth some debate: changing the format of Strikeforce's other Showtime productions.

By relegating someone like Jay Hieron to the undercard, you're ensuring that almost no one sees his fight. The problem could have easily been rectified. Strikeforce essentially has monthly cards on Showtime where they could have featured him as a possible title contender. Though some of these events are designated "Challengers Series" cards, highlighting young and upcoming talent, it seems crazy to me that Hieron -- a legit title contender -- is fighting in an untelevised fight while less than one month later, Strikeforce and Showtime are hosting another event in which he could have been featured in the main event.

4) It's time to test Bobby Lashley
No disrespect to Wes Sims, but he wasn't an ideal opponent for Lashley, particularly on one week's notice. The late matchup was actually a bigger problem than the opponent, because it put Lashley in the position of winning or losing against an underprepared fighter. In effect, there wasn't much upside to be gained for him.

Lashley needed just 2:06 to win, though a bit of controversy followed regarding the stoppage.

Afterward, Coker said that Lashley could potentially face Brett Rogers. Good. Though he's only five fights into his career, Lashley's also 33 years old and continues to dabble in pro wrestling.

Book this fight with plenty of lead time for him to prepare, and let's all find out how committed Lashley is to the sport, and more importantly, how good he is.

5) Manhoef vs. Lawler -- Let's do it again
I'm not sure what I learned from watching this fight except that it ended up being about as great as I'd hoped for.

When this fight was announced, I questioned if Robbie Lawler could withstand Melvin Manhoef's barrages and find the right opening, but that's exactly what he did. Very difficult to do under adversity, but he was composed and on the money when the opportunity came.