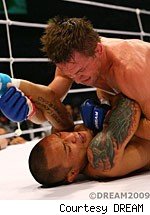 Bellator continued their recent and extended string of quality signings, inking featherweight Joe Warren to compete during their upcoming season.

Warren, 33, competed for years in amateur wrestling, including on the international circuit, where he won the 2006 FILA Wrestling World Championship in the 130-pound class.

He began the transition to MMA in 2008 and debuted in March 2009. With just a few months of training under his belt, he surprised many observers by stopping former WEC bantamweight champ Chase Beebe in his DREAM debut, then advancing to DREAM's Featherweight Grand Prix finals by stunning MMA legend Kid Yamamoto before losing to Bibiano Fernandes via arm bar in the championship round.

Other competitors in the Bellator featherweight tournament include Georgi Karakhanyan, William Romero and Bao Quach. The organization's second season begins on April 8.