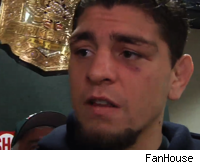 Nick Diaz held court following his first-round TKO victory over Marius Zaromskis Saturday night, and the new Strikeforce welterweight champion touched on everything from his performance in the fight, his belief that he doesn't receive enough respect in the MMA community and some of his proudest accomplishments in MMA.

Diaz also said that he didn't believe Jay Hieron, who defeated Joe Riggs at Strikeforce: Miami, was a worthy No. 1 contender and that the only fight that really excites him right now is one against UFC 170-pound champion Georges St-Pierre. Check out the video below.