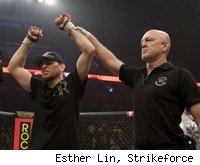 SUNRISE, Fla. -- Nick Diaz won two big fights for Strikeforce in 2009. He started 2010 by winning an even bigger one, becoming the promotion's new welterweight champion by defeating Marius Zaromskis by first-round knockout at Strikeforce Miami.

Although the smart game plan probably would have been to go to the ground, Diaz is a brawler who loves nothing more than to stand and trade punches with his opponent, and that's exactly what he did during a first round in which Zaromskis landed some solid strikes, but Diaz looked better than usual in the stand-up game.

Zaromskis flattened Diaz with a hard punch at one point, but it was Diaz who did more damage with his hands, finally sending Zaromskis to the ground with a hard right hand that caused the referee to stop the fight.

Diaz improved his record to 21-7 and earned the Strikeforce welterweight belt, which he'll likely defend against Jay Hieron. As usual with Diaz, he didn't have much to say afterward when asked about the prospect of fighting Hieron.

"Whatever, man, you know?" said Diaz afterward, shrugging his shoulders, thanking his coaches and sponsors, and generally acting like a guy who had just had another ordinary day at the office.

But Diaz is no ordinary fighter. He's the Strikeforce welterweight champ, and he's one of the best welterweights in the sport. He's looking to follow a big 2009 with an even bigger 2010.