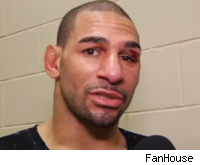 SUNRISE, Fla. -- Jay Hieron picked up his second straight Strikeforce victory on Saturday night against Joe Riggs, and when MMA Fighting caught up with the former IFL champion moments after the victory, he said his unanimous decision win should put him next in line for Nick Diaz and his newly won 170-pound title.

Hieron also talked about the nasty cut he sustained in the fight and his overall impression of the fight. Check out the video interview below.