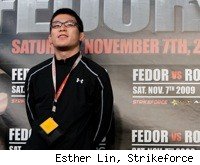 SUNRISE, Fla. -- An exhausted Strikeforce CEO Scott Coker asked to sit down before granting an interview in the wee hours of Sunday morning following what he termed a successful Strikeforce Miami show, but he wasn't looking to take much of a break.

A few of the fights Coker said he's working on booking:

Shinya Aoki vs. Gilbert Melendez: "Aoki and Melendez is going to happen before summertime," Coker said confidently. Talking to Coker, you get the sense that he's personally more excited about bringing Aoki to the United States than he is about any other fighter he can sign. Melendez is the Strikeforce lightweight champion and Aoki is the Dream lightweight champion, and a bout between the two of them would be one of the best lightweight bouts of the year.

Nick Diaz vs. Hayoto Sakurai: Most people thought Jay Hieron earned a shot at the welterweight title by defeating Joe Riggs, but Coker said it's more likely that Sakurai will be the challenger in Diaz's first title defense. Sakurai fights for Dream, and Coker said Strikeforce's co-promotional arrangement with Dream ensures that "I could get it done." Hieron's win over Riggs was the last fight on his Strikeforce contract, and it's not clear whether Hieron will return to the promotion.

Cris Cyborg vs. Erin Toughill: The next shot at the 145-pound women's title will go to Toughill, who boasts a 10-2-1 record and a good ground game. It's hard to see Toughill providing much of a challenge for Cyborg, but then again it's hard to see any 145-pound woman providing much of a challenge for Cyborg. Toughill is as good an opponent as anyone else for now, and later this year Strikeforce will find another challenger for Cyborg by pitting eight 145-pound women in a tournament to determine the No. 1 contender in the weight class.

Bobby Lashley vs. Brett Rogers: I was surprised when Coker mentioned this fight as a serious possibility, but he says it absolutely could happen, and that he wants it to happen. Personally, I'd be shocked if Lashley agrees to face Rogers, and even more shocked if Lashley makes it out of the first round against Rogers if this fight gets booked. But Coker said a huge step up in quality of opposition is coming for Lashley, and that Lashley will stay active and get back into the cage soon.