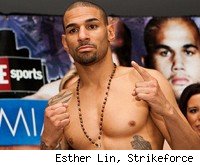 The fight was a mostly dull decision, punctuated only by a few brief flashes of action in the final round.

The first round was fairly uneventful, with both fighters spending more time feeling each other out than actually fighting. In the final minute of the round the crowd started to boo the lack of action.

In the second round they went to the ground, with Hieron ending up in Riggs' guard, and again there wasn't much action. The booing got even louder late in the second, and the crowd urged the referee to sand the fighters up. He didn't, and neither fighter did much.

RIggs dropped Hieron with a hard punch early in the third, but he proved ineffective on the ground. With two minutes left in the third the ref finally stood the fighters up, and Hieron leveled Riggs with a huge left hand that got the restless crowd cheering.

"Joe Riggs is a tough guy, man," Hieron said afterward. "I came to Strikeforce to get a title shot."

Hieron, who improved to 19-4 with the win, will likely get that title shot. But when he does, he'll need to fight better than he did on Saturday night.