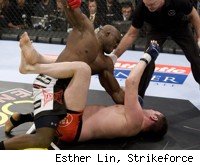 But describing Sims as Lashley's toughest opponent says more about the four guys Lashley had fought before Saturday night than it does about Sims: None of Lashley's opponents have been particularly good, and that includes Sims.

Lashley took Sims down quickly and then pounded him on the ground, eventually forcing the referee to stop the fight to protect sims from taking any more punishment. Lashley did what he needed to do to win the fight, but he didn't do anything more than rely on his wrestling and power; he still hasn't shown that he's developing into a complete mixed martial artist.

Sims is a UFC veteran who entered the fight with a 22-12-1 record, but the vast majority of those wins have come against weak opponents. Strikeforce chose Sims as Lashley's opponent because it wanted to hand Lashley a relatively easy victory.

Now Lashley needs a step up in competition.