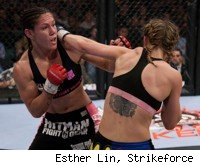 "I'm very happy, I prepared myself very much, I trained a lot," Cyborg said afterward, adding that she considers Coenen the toughest opponent she's faced to date.

The first minute of the fight featured back-and-forth action, and Coenen appeared to surprise Cyborg by standing and trading punches with her in the early going. Cyborg quickly took Coenen down and got on top of her, landing a couple of hard punches. But Coenen, a Brazilian jiu jitsu specialist who is very comfortable on the ground, stayed poised and relaxed while Cyborg was hitting her.

Eventually Coenen frustrated Cyborg enough on the ground that Cyborg stood the fight back up, and it was, again, a good back-and-forth battle, although Cyborg landed the more powerful strikes.

Early in the second round Cyborg rocked Coenen with a very hard punch, knocking her flat on her back, but Coenen again showed poise and resilience, and as Cyborg charged in on Coenen, Coenen made her pay for it by landing a hard upkick. But Cyborg controlled the second round, landing hard punches both standing up and on the ground.

In the third Cyborg took complete control, and eventually, while she was on top of Coenen and continuing to land punches on the ground, the referee stepped in and stopped the fight. The stoppage may have been too quick -- Coenen has a good ground game and seemed capable of intelligently defending herself -- but Cyborg was certainly dominating the fight.

Dominating is what Cyborg has been doing repeatedly in recent years. She has now improved her record to 9-1, and she's the best female fighter in the world. But Coenen, whose record falls to 17-4, deserves credit for giving a tough fight to the toughest woman in the world.