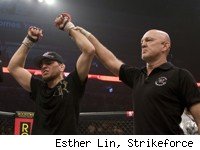 DREAM welterweight champion Zaromskis makes his Strikeforce debut against Diaz for the vacant Strikeforce belt. The high-kickin' Zaromskis has won his last three fights with head kicks. Diaz says he's at his best at welterweight and he is back down to 170 after two catchweight bouts in 2009.