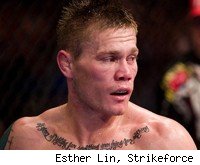 This is the live blog for Jay Hieron vs. Joe Riggs, a welterweight bout streamed on the EASportsMMA.com Web site for Strikeforce: Miami.

Hieron and Riggs battle for a potential title shot at a future date against tonight's winner between Nick Diaz and Marius Zaromskis.

Round 1: Both fighters look like they want to stand. They seem to be in a feeling out process right now because there isn't much engaging going on. Hieron has landed a couple of punches and legs kicks. Nice spinning back kick with 1:30 left in the round. Nice to the see the clock return, by the way. Crowd starting to get very restless. Here comes the boos. Riggs pulls guard with 25 seconds left. Hieron in Riggs' closed guard. Riggs not allowing Hieron to posture up.

MMA Fighting scores first round 10-9 in favor of Hieron

Round 2: Hieron looking a little more aggressive to start this round. Hieron lands a left hook and then a leg kick to the body. Riggs pulls guard again. Riggs is pretty active on his back, landing strikes from the bottom. Hieron landing a few strikes, as well. Riggs escapes and stands up. Round ends with both men in clinch.

MMA Fighting scores second round 10-9 in favor of Hieron

Round 3: Riggs rocks Hieron with a left hook. Riggs then tries for a flying knee, but Hieron takes him down. Riggs is bleeding from his left eye. Hieron is in Riggs guard again, landing strikes to the body. Referee stands them up. Riggs rushes in towards Hieron, but Hieron drops him with a left. Riggs looks to be in trouble as Hieron pounces on him, but he weathers the storm by keeping Hieron in his guard. Riggs is attempting a kimura while Hieron is in his closed guard, but Hieron is doing a good job of keeping his hands locked. Fight ends with both men standing.

MMA Fighting scores third round 10-9 in favor of Hieron