Vitor 'Shaolin' Ribeiro Wondering When He Will Make Strikeforce Debut 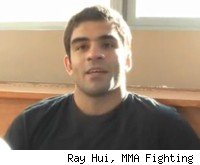 Four months into signing with Strikeforce, Vitor "Shaolin" Ribeiro is still in the dark as to when he will make his promotional debut.

"I'm very upset. Very sad," Ribeiro told MMA Fighting. "I spent a great time in my camp in Brazil. Everything so well and I feel ready to go, but everything stepped back again."

The former top-ranked lightweight was dominant in the first six years of his career, winning 19 of 20 fights, including victories over Tatsuya Kawajiri, Joachim Hansen and Mitsuhiro Ishida.

According to Ribeiro, who inked a deal with Strikeforce in September after completing a five-fight stint with K-1 and DREAM in Japan, he has been bumped from several cards in the last three months.

Ribeiro lives in New York City and in December traveled back to Brazil to train for three weeks with his Nova União camp. He would have made another trip for a second part of training, but the remainder of the camp was canceled when it turned out he wouldn't be fighting at this Saturday's Strikeforce in Miami.

Ribeiro is unhappy with having spent money to bring in training partners to his school and expending intense physical and mental tolls only for fights to fall through.

"I try to figure out what happened right now to make sure I have enough motivation in myself to start training to do everything again," Ribeiro said.

Ribeiro's last fight was a decision loss to No. 2-ranked lightweight Shinya Aoki at DREAM.10 in July. After experiencing a 17-month absence due to injury in 2007-2009 and now approaching the seven-month mark without a fight, Ribeiro is antsy to step back in the cage again.

"My goal right now is to try to get a spot on that show," Ribeiro said.