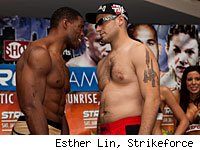 SUNRISE, Fla. -- All the marquee fighters made weight without incident at Friday night's Strikeforce Miami weigh-ins, but that doesn't mean nothing notable happened.

MMAFighting.com was on the scene at the BankAtlantic Center in Sunrise, Fla., and we'll fill you in some of the details below.

-- Herschel Walker looks ridiculously good for a 47-year-old man. He's lost a little bulk since his NFL days, but he's still sculpted and muscular. We'll find out on Saturday whether he can fight, but we found out on Friday that he's in shape.

-- Walker's opponent, Greg Nagy, is pudgy and doesn't appear to be in particularly good shape.

-- There wasn't much space for fans in the room where the weigh-ins took place, but the few fans who did turn out were vocal in their support of Melvin Manhoef, who got the loudest cheer of all the fighters on the scene. Manhoef has fought almost all of his career in Japan and isn't known beyond the hard-core fans in the United States, but those hard-core fans love him.

-- After weigh-ins and medical examinations were completed, Marloes Coenen and Cris Cyborg had one final piece of business: A pregnancy test, which is the only additional step that female fighters must go through before they get licensed. The commission did not immediately release the results of the pregnancy tests, but there was no indication that either Coenen or Cyborg was pregnant so presumably they're clear to fight.

-- Coenen and Cyborg also provided the best staredown of the night. They looked intense.

-- Watching Nick Diaz and Marius Zaromskis standing in front of each other, it's plain to see that Diaz has a significant height and reach advantage. It's going to be awfully tough for Zaromskis to overcome that disadvantage and land one of his patented head kicks.