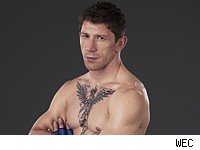 WEC President Reed Harris said Friday that the upcoming fight between Jose Aldo and Urijah Faber will be the main event for the promotion's first pay-per-view show, most likely in May, and shortly after that announcement, Brown (who was hanging out at the BankAtlantic Center for the Strikeforce Miami weigh-ins) said that he'll be on the card as well.

Brown doesn't know for sure who his opponent will be, but it would most likely be either Manny Gamburyan or the winner of the upcoming WEC 47 bout between Deividas TauroseviÃ„Âius and LC Davis.

Brown won the featherweight title by defeating Faber in 2008 and defended it twice in 2009 before losing the belt to Aldo. He's one of the WEC's best and most popular fighters, and if the WEC is going to make pay-per-view work, it's going to need high-quality fighters like Brown on the undercard. So it makes sense that Brown would be fighting on the promotion's first pay-per-view.