Marius Zaromskis vs. Kiyoshi Tamura in Works for DREAM.13 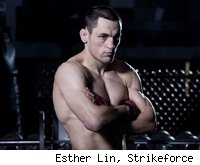 Marius Zaromskis (13-3) is set to face Nick Diaz for the vacant Strikeforce welterweight title on Saturday night, but regardless of what happens at Strikeforce: Miami, it appears as though "The Whitemare" will head back to Japan for his next fight to defend his DREAM 170-pound title against Kiyoshi Tamura (32-13-3) at DREAM.13 on March 22.

MMA Fighting learned on Friday that the Japanese-based promotion is close to signing the bout. Of course, should Zaromskis get seriously injured against Diaz, there is a chance the fight might not happen.

Zaromskis really made a name for himself during last year's DREAM Welterweight Grand Prix, when he won his last two fights via head kick. He also defeated Myeon Ho Bae via 19-second knockout head kick in October.

Tamura hasn't fought since defeating Kazushi Sakuraba at the Dynamite!! 2008 show. The 40-year-old, who isn't accustomed to fighting at welterweight, has been competing in MMA since 1995 and holds victories over Patrick Smith, Maurice Smith, Renzo Gracie and Masakatsu Funaki.

DREAM recently announced that their 13th event will take place at the Yokohama Arena in Yokohama, Japan, and it will air live on HDNet in North America. Bibiano Fernandes will also defend his 145-pound belt against Joachim Hansen on the card.