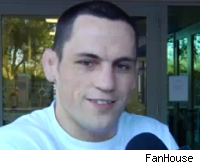 SUNRISE, Fla. -- Prior to entering the DREAM welterweight tournament last April, little was known of Marius Zaromskis. But after he knocked out three straight opponents via head kick en route to capturing the 170-pound title, the Lithuanian fighter immediately became one of the hottest prospects in MMA. On Saturday night, "The Whitemare" will look to cement his status as one of the best welterweights in the world when he faces Nick Diaz for the vacant Strikeforce title.

MMA Fighting spoke to the 29-year-old about his newfound fame, preparing for Nick Diaz, his unique nickname and entrances and whether he wants to show the world that he has more weapons in his arsenal than just kicks. The video interview is below.