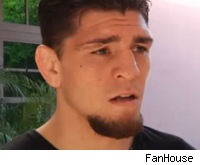 SUNRISE, Fla. -- The last time Nick Diaz won an MMA title was in March 2003, but the veteran from Stockton, Calif., will have a chance to add an important to title to his impressive resume on Saturday night when he faces Marius Zaromskis for the vacant Strikeforce welterweight title.

MMA Fighting spoke to the 26-year-old Diaz about fighting for the belt, his recent time away from the cage, his frustrations with MMA judging, why he believes he can beat Georges St-Pierre and Anderson Silva and whether he feels as though he has unfinished business in the UFC. The full video interview is below.