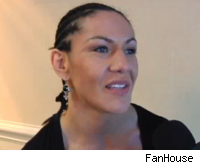 SUNRISE, Fla. -- Some have called Cris Cyborg the new face of women's MMA, and if the current Strikeforce 145-pound champion is hoping to secure her status as the most important female fighter in North America, she is going to have to successfully defend her title against Marloes Coenen at Strikeforce: Miami on Saturday night.

MMA Fighting spoke to Cyborg about her first title defense and why she expects a war from the Dutch fighter. She also talked about being an ambassador for women's fighters and why she is still considering an offer to pose nude in Playboy. Check out the video interview below.