Roxanne Modafferi Welcomes King of the Cage's Entry to Japan 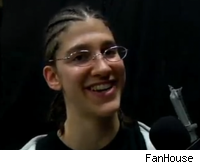 It has taken a US-based promotion coming to Japan for her to secure a fight without having to book a plane ticket, but Roxanne Modafferi is just excited to get back in the cage.

"It's super lucky for me, since I have trouble finding a fight in Japan," Modafferi told MMA Fighting. "I get to fight but don't have to go far this time."

Modafferi fights this Saturday at King of the Cage's debut in Japan, "Toryumon" at the Okinawa Convention Center.

Modafferi fought only once last year and it was a short notice fight to come to Chicago as a replacement for Erin Toughill against Marloes Coenen at Strikeforce: Fedor vs. Rogers.

Modafferi, who moved to Tokyo after graduating from the University of Massachusetts in 2005, will represent Team Japan against Molly Helsel.

"She looks pretty well balanced as a fighter and likes to throw down," Modafferi said. "That makes me super excited, because that's just what I want from this fight. She'll try and hit me, I'll try and sock her. It'll be great."

Helsel trains out of Throwdown Elite in San Diego, Calif. and is a veteran of the HOOKnSHOOT and Bodog Fight promotions. Helsel is also a 125-pounder -- 20 pounds less than Modafferi's previous opponent.

When Modafferi lost by first-round armbar to Coenen last November, Coenen was the one to earn the 145-pound title shot against Cris Cyborg. Modafferi chimes in on Coenen's title challenge, happening in Miami, Fla. on the same day.

"I'm really not sure. I think it could go either way," Modafferi said. "If Marloes can weather Cyborg's storm and stand up to her raw power, I think Marloes can submit her. On the other hand, if Cyborg overwhelms Marloes, then she can take it. We'll just have to wait and see. The fact that I can't predict the ending makes it a good match, right?"

Since leaving the Wajyutsu Keisyukai gym last July, Modafferi said her training has been primarily with Kunioku-san for striking and Abe-san and Megumi Fuji for grappling and MMA. Lately she's been able to reunite with her best friend and former training partner Sakura once a week at the K-Taro dojo. Besides that, the avid gamer is happy welcoming another reconnection.

"I just attained a Playstation 1 and 2 to replace my broken PS1," Modafferi said. "So now I can play games again!"