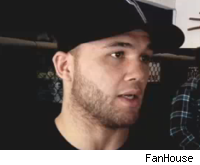 SUNRISE, Fla. -- Robbie Lawler admits that his inability to find an opponent prior to Strikeforce: Evolution was frustrating, but the former EliteXC middleweight champion has put that situation behind him and is clearly focused on Saturday night's opponent, Melvin Manhoef. And despite the fact that Lawler's ground skills are more well-rounded than Manhoef's, he told MMA Fighting at Wednesday's media day that he has no interest in taking this fight to the ground.

Lawler also talked about the keys to defeating Manhoef and his biggest weaknesses as a fighter. The video interview is below.