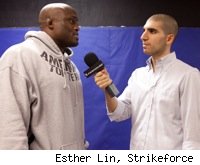 SUNRISE, Fla. -- It took a while, but Bobby Lashley finally knows who he'll be facing in his Strikeforce debut on Saturday night. Of course, the part-time pro wrestler recently agreed to fight veteran Wes Sims at Strikeforce: Miami. Next, it might be time for Lashley to choose whether he will focus all his attention on MMA.

MMA Fighting spoke to Lashley at Wednesday's media day about how frustrating the whole process of finding an opponent was for him, his maturation as an MMA fighter, how serious he is about his fighting career and why he has no interest in engaging in a war of words with Sims. Check out the video interview below.