Five Burning Questions for Strikeforce in 2010 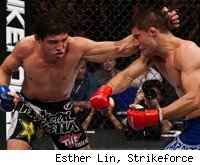 Strikeforce has a lot planned for 2010 such as the crowning of new champions, potential Strikeforce-DREAM unification title bouts and a second live card on CBS.

MMAFighting discusses the promotion's future stars and what could be in store this year for the former regional promotion.

Does Strikeforce have the most compelling fight in MMA in 2010 on their hands with Fedor Emelianenko vs. Alistair Overeem?

Helwani: I don't think so. Here are three simple reasons why:

1. I don't believe that fight will ever happen. In fact, my gut tells me we won't see Overeem compete for Strikeforce in 2010.
2. The return of Brock Lesnar, against any top contender, is a lot more compelling right now.
3. Did I mention I have no reason to believe Overeem will fight for Strikeforce any time soon?

Hui: From the matchups being projected, it's up there. There's a certain Mayweather-level of electricity for Fedor-Overeem, as it involves the consensus No. 1 heavyweight in world against his toughest challenge outside of the UFC. After the whole Josh Barnett debacle, Overeem is the only fight for Fedor Emelianenko outside of the UFC that matters.

I can't say that I agree that Lesnar against any top contender is more compelling right now. Fedor and Overeem are at their peak and the fight could potentially be very competitive while Lesnar's contenders are either still developing, have seen better days or would be huge underdogs.

Which one of the new Strikeforce signees will stand out the most?

Helwani: There are a lot of candidates to choose from, but I am going to go the easy route and say Dan Henderson. I think his debut on CBS will create a lot of buzz for the organization, and I favor him in a potential middleweight title match against Jake Shields.

That said, I think we are going to see a lot of breakout stars develop for Strikeforce in 2010. This time next year, I expect "Jacare" Souza, Muhammed Lawal, Kerry Vera and Daniel Cormier to be a lot more popular than they currently are.

Hui: Henderson is a certainty to make an impact in some capacity. If I had to pick a breakout star, I would go with "Jacare" Souza. Jacare is one of the best grapplers on the Earth. During his last fight against Lindland, he really impressed me with the improvement in his hands. He could be next in the title mix. Yeah, he had success with DREAM, but he hasn't made an impact on the rankings. He has the potential to do that now since he's a part of Strikeforce's middleweight roster.

Is this a make-or-break year for Strikeforce?

Hui: Strikeforce won't go away, but it can fall back to being a regional promotion if it doesn't deliver ratings for CBS. Losing the television deal would drastically change the direction for the promotion. Having network TV allows them to support some of the big signings like Dan Henderson and keep the up-and-comers from jumping ship.

Helwani: Absolutely not. I think this year will prove to be more successful for Strikeforce and Showtime because it feels as though they are starting to get their ducks in a row. The key to Strikeforce's continued growth is to not expand too quickly. Their roster is at a pretty solid size right now, and there is no real need to add anyone else. If they continue to sign new talent, some of their young stars will start to get lost in the mix. Showtime has already proven that they are committed to MMA, so as long as they are around, I don't see Strikeforce going away like some of the other failed promotions of recent years.

Helwani: As I mentioned earlier, I don't think Overeem will ever defend his title, so I think Fedor Emelianenko will end up being the champion at some point this year. Gegard Mousasi will keep his light heavyweight belt, but will start to feel the presence of Muhammed Lawal looming over him soon. As for the rest of the titles, Dan Henderson will be the middleweight champion, Nick Diaz will rule the welterweights and Gilbert Melendez will finally cement his status as the best lightweight Strikeforce has to offer.

I also think Cris Cyborg will be the 145-pound women's champion, but only after she defeats Marloes Coenen in their rematch. Yes, I think Coenen will pull off the upset on Jan. 30, but will fail to retain the title when they meet again. Meanwhile, Sarah Kaufman will close out the year as the first and only 135-pound women's champion.

Hui: I agree with you. I see Henderson beating Shields, Diaz beating Zaromskis and Melendez retaining his belt unless Tatsuya Kawajiri or Shinya Aoki come to the States to challenge him.
Should Strikeforce offer pay-per-view shows this year?

Helwani: No. It's no secret that a promotion needs to put together consistent pay-per-view shows in order to make money, but history has shown us that non-UFC pay-per-views do not generate all that much revenue. That's not to say that Strikeforce should not be building towards pay-per-view, because they should absolutely be doing so, but I don't think their champions, contenders, and most importantly, their brand has been established enough in the eyes of the casual MMA fan to make pay-per-view a viable option. If they experience the same kind of growth in 2010 that they did in 2009, I fully expect Strikeforce to be ready to make a serious push in the pay-per-view market come early 2011.

Hui: I don't think so either. The pay-per-view business can reap great rewards as the UFC has shown, but no other MMA promotion has been able to duplicate anything close to the UFC's successes. For pay-per-view to be successful, a promotion really needs a strong weekly television platform to sell the PPVs. Strikeforce isn't ready for that right now.