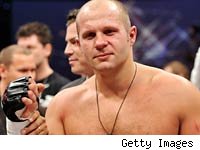 The power and influence of mixed martial arts continues to make inroads into the mainstream world at large. The next bit of evidence comes from BusinessWeek, who just recently released a ranking of the 100 Most Powerful Athletes in sports.

The magazine teamed up with sports and entertainment agency CSE to rank athletes both on and off the field, based on their success in their sporting arena combined with their appeal to advertisers, sponsors and fans.

The top-ranking fighter was Russian star Emelianenko, who checks in at No. 83, ahead of such sports notables as racing star Danica Patrick and boxer Floyd Mayweather.

Noting that Lesnar is "an ideal fit for companies trying to get in touch with their tougher side," the UFC heavyweight champion was ranked at No. 96, ahead of such athletes as controversial Cincinnati Bengals wide receiver Chad Ochocinco and extreme sports star Ryan Sheckler.