Bellator Selects Its Home Base 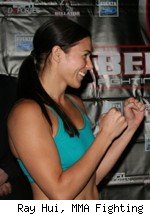 Mixed martial arts promotions typically have one town they return to over and over again with their biggest and best events. The UFC has Las Vegas. Strikeforce has San Jose. The WEC has Sacramento.

Bellator Fighting Championships has now made it official that it has a home of its own, with Hollywood, Fla., set to host Bellator's top shows in 2010.

Bellator has announced that its Season 2 premiere will take place on April 8 at the Seminole Hard Rock Hotel & Casino in Hollywood, Fla., and that it will return to the venue for its June 10 Season 2 finale, its Aug. 12 Season 3 premiere and its Oct. 28 Season 3 finale.

"We are thrilled to be returning to the Seminole Hard Rock during our second and third seasons," Bellator founder and CEO Bjorn Rebney said in a statement. "As we discovered during our inaugural season, the Hard Rock Live is one of the finest, most state-of-the-art venues for MMA and the fan response was spectacular. We're looking forward to bringing four world-class MMA events to South Florida and some of the country's most devoted and die-hard MMA fans."