Chuck Liddell Wants to Retire on His Own Terms 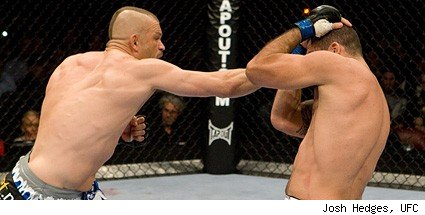 At 40, Chuck Liddell still has the itch to continue fighting and wants to ultimately be the decision maker when it comes time to retire.

In an interview Monday with the Las Vegas Review Journal during media day for The Ultimate Fighter 11, Liddell sounded like a man far from ready to call it quits.

"I have to go out on my own, the way I want to go out. It has to be my decision," Liddell said. "I'm not going to let fans or people that aren't that close to me and don't watch me train, don't see what I can still do, make that decision for me."

After back-to-back knockout losses to Rashad Evans at UFC 88 and Mauricio "Shogun" Rua at UFC 97, his close friend and UFC president Dana White took initiative last April to seemingly force Liddell into retirement, telling the press, "I don't want to see anybody stick around too long. You're never going to see Chuck Liddell on the canvas again."

After a layoff that saw Liddell gain national exposure as a contestant on Dancing with the Stars, Liddell got in shape and convinced White for another shot at fighting.

Liddell enters the cast of next season's Ultimate Fighter as a head coach against rival Tito Ortiz. Liddell will have at least one more fight when he meets Ortiz in a trilogy fight following the season finale on Spike TV.

"I miss fighting and I want to fight, so that's what I'm doing," Liddell said. "I'll keep arguing and [White] will keep arguing with me. I just have to show him that I can perform."

"I would like another fight and then I want another fight after," Liddell said. "Hopefully, Dana's happy with my two wins and I get a shot at a contender and then a shot at a title. That's four fights and that's about as far forward as I've thought."