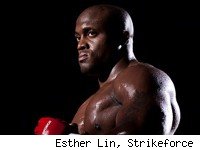 Being a fighter with name value early on has its up and downs. There's been instant hype and exposure for Bobby Lashley ever since his MMA debut, but it's also brought on confusion as to what caliber of opponents he should be facing at this point of his career.

After the commission rejected Yohan Banks and Showtime turned down Jimmy Ambriz, Lashley (4-0) will enter his Strikeforce debut Saturday against Wes Sims (22-12-1) -- an opponent confirmed only eight days beforehand. In an exclusive interview with MMAFighting, Lashley responds to criticism that he should be fighting tougher opponents and his approach as both an MMA fighter and TNA pro wrestler.

Ray Hui: How relieved are you to know that you finally have an opponent?
Bobby Lashley: It's a pretty cool feeling. I've been waiting too long. I knew they had a handful of opponents in mind. I'm just glad to finally have one.
Is one week enough for you to properly scout an opponent like Wes Sims?
I don't think so, but it's a fight. You can scout people as much as you want. At the end of the day, it's a fight, so you got to be ready for almost anything.
How would you compare your career situation now from this time a year ago?
I think I'm really ready to go right now. Everything's been going great. Actually, I opened up a gym in Denver so that I can stay here and train a little bit more often. With that, being at home and not having to leave my kids and all that, it's been going great.
When the commission nixed the Yohan Banks (2-1) fight for a lack of competitiveness, that opened the doors for everyone from fans to writers to discuss what caliber of opponents you should be facing at this point of your career. Do you think people are being too harsh on you when they want to see you fight better opponents right away? And do you think it's justified?
I don't know. I think I can take it as a compliment. I'm only 4-0 right now, so if they think I should be fighting someone better, maybe draw out a couple of names? See who they think the better opponent should be. Is it someone who is 4-0 also or if it's Fedor who is 31-1 or who are they really looking at right now? That's what I'd like to know, so I can have a good comparison.Another one of Strikeforce's top heavyweight prospects is Shane Del Rosario. Was that ever brought up?
I've never even heard of this guy. I was just reading online and there was so many names that have popped up online. What's his record?

He's 9-0.
9-0. Okay. [Chuckles.] I'm 4-0. So I should be going up against someone who is 9-0? Maybe? I don't know. I just don't know exactly what they want. If I was 9-0 then, yeah, that would be a great person to go against. But me right now, 4-0, maybe it'll be the second or third [Strikeforce] fight. I don't know. I'm open, man. I'm here training and like I said, I want to advance my career wisely until I get that big opportunity to get that big shot against a big opponent. But for right now, I'm building and I'm learning every aspect of the game and just trying to get better and better each fight.

When you signed with Strikeforce, you told us that the biggest part of signing with Strikeforce was being able to stay active. Do you think that might not be so much of a perk with the recent shuffling of opponents?
No, no, actually I think it might help. I think the shuffling of opponents, the reason behind that was cause they were trying to make a good TV match, since it was going to be one Showtime. With Strikeforce: Challengers and everything like that, so if I need to get some extra fights in there, I'm sure they can put me on a Challengers show. I wouldn't mind doing that. Going out there and get some more fights and they wouldn't have to worry about finding opponents for me. In those fights, it could be anyone. Hopefully, I can get four-five fights this year.

When you first began with the WWE, how much was it out of an interest for the pro wrestling and how much was it as pretty much the only option at the time to make a living in athletics following amateur wrestling?
No, I was actually training at the Olympic wrestling center at the time, so it wasn't the only option. I was a wrestling fan growing up. It was one of those deals where when an opportunity like that gets brought to you, you got to actually really seriously consider it. When it was brought to me, I thought it was a great opportunity. I went out there and tried it out. They liked me. I liked training so I was pretty excited to have the opportunity to do it.
Back then collegiate wrestlers could turn to pro wrestling as the next step. Nowadays, MMA is another avenue. Do see that affecting the businesses of both pro wrestling and MMA?
If you play college sports, it's not like you have to -- the next step in your career is another sport. You don't have to go into another sport. If you play college sports, you obviously graduated with a degree. I was a business management major. So because my wrestling was finished doesn't mean I can't go into my profession. There's also coaching. There's a bunch of different things you can do after you finish your career. If you're looking into something fo mainstream media stardom, yeah, then it's going to be your pro wrestling and your MMA, or even an acting role in a fight scene or something like that. But not everyone wants to go into that star role.
I should have been more clear. What I meant was for collegiate wrestlers who love to train and want to continue on with that competitive spirit, pro wrestling was the big option as far as a full-time gig.
I don't know if it was the big option, because I don't know of too many people that actually went into it. Besides myself, was Kurt Angle and Shelton Benjamin. But as far as right now, the option with MMA does open up huge door for amateur wrestlers. Like you just said, a lot of amateur wrestlers when they finish, it's like, after that last tournament, "Man, I still want more. I still want more." And going into Olympic training center, it's really tough, because when you're there. I was there for three years. And when you're there, you want to do it full-time, but you don't get full-time pay. You can't really support yourself. You're almost like in college but out of college. So it's kind of tough. With MMA, you can actually fight and make some money doing it. So yeah, I think MMA is going to be flooded with amateur wrestlers coming out of college. We have a lot of great wrestlers that are coming out next year and that are going to keep coming out in the future. I'm sure a lot of amateur wrestlers are going to be coming to MMA really soon.
You're being billed to appear on the TNA wrestling UK tour and you were written out of the Jan. 17 pay-per-view. Was there some sort of miscommunication?
Yeah, at the time I wasn't signed with Strikeforce. It was something they wanted me to do. When I originally signed up with TNA, that was kind of the understanding, that fighting is very important for me. And they said when I have a fight coming or something is coming up, they would give me the opportunity to kind of back away from wrestling a little bit and train so that I can focus on my fight. When the opportunity came to sign with Strikeforce, the first thing Scott Coker wanted me to do is fight on that Jan. 30 card. That was pretty much the terms of me signing the contract. When I signed the contract, I had to go back to TNA and say, "Look, I have to fight on the 30th." It did cause a little problem with them because I was advertised to go on their tour. I didn't know how much I was advertised. Of course, being a wrestler there, they are going to advertise on every match they have. So they had to pull me out and explain to the fans that I wouldn't be there. But they understand and they are going to support my MMA career.

TNA was relaunched a few weeks ago with Hulk Hogan and Eric Bishoff running the show. They are notorious for their backstage influences. Has that affected your relationship and future with TNA?
No. Not yet. [Chuckles.] Hopefully it doesn't. [Laughs.] I've talked to Hogan and Eric a couple times since they've been there. Everything's pretty cool. They understand where I'm at. They understand what I'm doing so hopefully we keep a good relationship and continue to do both. If not, that's something we'll have to talk about a little later.
Is there a good chance we'll see you on the April Strikeforce-CBS card?
Yeah, I'm sure there's a chance. It probably depends on how good of a showing I have next week. I guess I have to go out there and bash him really bad so I can get that call up for that April show. I'd love to be able to fight in it.