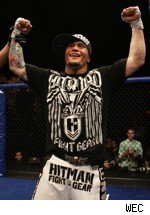 After picking up impressive wins last fall over Noah Thomas and Takeya Mizugaki, 27-year-old bantamweight Scott Jorgensen will next fight against Chad George at WEC 47 on March 6 in Columbus, Ohio, the WEC announced Monday.

Jorgensen (8-3) is 4-2 in the WEC and last defeated a former WEC title challenger in Mizugaki in a bout declared the Fight of the Night at WEC 45.

George (11-4) took a step up from fighting .500 level opponents in his WEC debut last month and defeated John Hosman by unanimous decision. George will be shooting for his seventh straight win against Jorgensen.