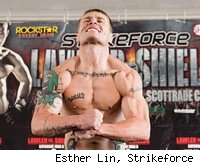 Good news for fans who were disappointed over the fact that the Jay Hieron-Joe Riggs fight would not be airing on Saturday night's Showtime telecast of Strikeforce: Miami: the welterweight clash will be streamed live for free on EASportsMMA.com. Strikeforce director of communications Mike Afromowitz confirmed the news, which was first reported on The Fight Show with Mauro Ranallo, with MMA Fighting on Monday.

Afromowitz said that the bout will likely air at approximately 9:00 PM ET / 6:00 PM PT. The Showtime telecast will kick off at 10 PM ET. It will air via tape delay on the West Coast at 10 PM PT.

A very vocal group of hardcore fans voiced their displeasure over the fact that the Hieron-Riggs tilt was relegated to the non-televised portion of the card to make room for unproven fighters like Herschel Walker and Bobby Lashley. And since Showtime usually doesn't air preliminary fights, there appeared to be no chance of watching the fight live.

So it's nice to see Strikeforce and EA Sports make this happen, especially considering the fact that the winner of this fight figures to be next line for a shot at the currently vacant Strikeforce welterweight title. Nick Diaz and Marius Zaromskis will battle for that title on Saturday, as well.

Both Riggs and Hieron will appear on the upcoming EA Sports MMA video game, which is expected to be released later this year.